The institution has been organizing gender equity programmes since 2015 in order to sensitize the staff and students with the issue of gender equality, and to prevent discrimination and harassment of the female staff as well as students. It has taken several initiatives towards gender sensitivity. CCTVs have been installed throughout the campus of the institute to monitor the movements of each person entering and leaving the premises. This has enabled that no untoward incidents have been reported throughout the campus, both during and after working hours.

Security personnel are employed in the campus throughout the day, as the institution is open from 8 am to 8 pm.

Separate common rooms for boys and girls, with separate rest rooms provide privacy. Ragging and sexual harassment are strongly prohibited and this is reinforced in induction and repeatedly thereafter. Clear policies as per UGC guidelines exist for violators.

The institution has made provision for multiple laboratories, where provision for practice for boys and girls separately is made and privacy is maintained through curtains. Separate male and female faculty supervises the students during practice.

The entire teaching and non teaching staff as well as students are part of the gender sensitization programme. It is emphasized during the programme that any sort of insensitivity towards women is strictly dealt with. This gives a strong message to everyone that even a trivial incident will be taken up seriously. This has resulted in no untoward incident being reported since the inception of the college. 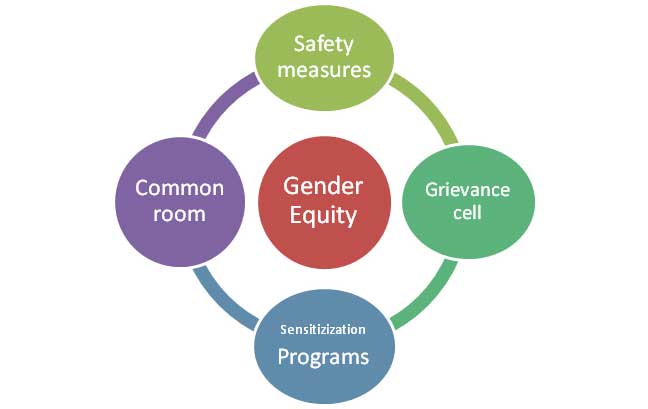